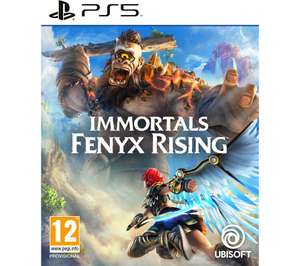 Go on a quest to save the Greek Gods and all of Mount Olympus from a Typhon, the deadliest Titan in Greek Mythology. Play as Fenyx, a new winged demigod, in an epic fight for the ages. Take on mythological beasts, master the legendary powers of the gods and become a legend.

You’ll be able to customise your character, unlock armour and weapons inspired by Greek mythology and upgrade your abilities to take on each new monster.

You’ll have to face off against legendary beasts like Cyclops, Medusa and the Minotaur using aerial and melee combat as well as your god-given abilities. There’s also challenging puzzles and vaults that you’ll have to tackle.

The world of Immortals Fenyx Rising is beautifully rendered and vibrant, with seven unique regions each inspired by the gods. Traverse, climb and explore across this unique world while upgrading your abilities.

This site uses Akismet to reduce spam. Learn how your comment data is processed.